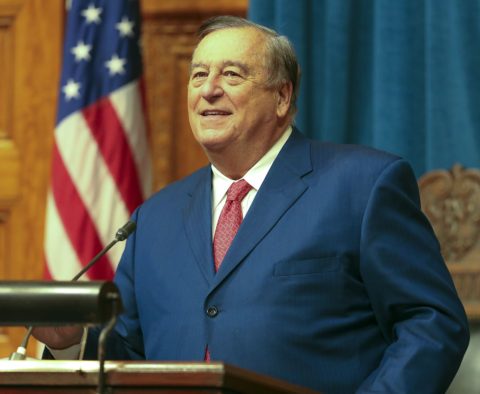 House Speaker Ronald Mariano knows Massachusetts is losing ground in the race with rival states for offshore wind-energy development, so he is pledging to pick up the pace of public investment for in the emerging industry.

Mariano compared the effort that he would like to see for offshore wind to the hundreds of millions the Legislature has plowed into the life-sciences industry over the years.

“Now, the Boston area is known the world over for its biopharmaceutical innovations,” he said. “We must pursue the same strategy to make Massachusetts the leader of our clean-energy future.”

Mariano made the promise during a speech on Thursday to the Greater Boston Chamber of Commerce. In pre-pandemic times, these annual speeches gave the House speaker an opportunity to highlight legislative priorities of interest to the business community. This one was no different, though it was Mariano’s first major speech outside of the Legislature in his new role — he took over for longtime speaker Robert DeLeo roughly three months ago — and it took place via videoconference, as opposed to in a hotel ballroom.

Mariano rattled off a long list of legislative actions in the past year to help businesses endure the COVID-19 pandemic: providing tax relief for recipients of federal stimulus payments, giving restaurants permissin to sell mixed alcoholic drinks to go, and allowing notarization of legal transactions.

The subject that received the most attention on Thursday, though, was offshore wind farm development. The 800-megawatt Vineyard Wind project is close to receiving its final federal permit, he said, and the 62-turbine project south of Martha’s Vineyard could provide enough power for more than 400,000 homes.

That project is the direct result of a 2016 state law requiring major electric utilities to buy up to 1,600 megawatts worth of offshore wind power. The Legislature essentially doubled that amount in 2018, and it just passed a new climate bill that would bring the total to 5,600 megawatts in offshore wind capacity.

Mariano told the chamber the state can’t stop there. He said the House will include $10 million in its budget proposal for the next fiscal year for the quasi-public Massachusetts Clean Energy Center, to prioritize job-training programs that will prepare workers for offshore wind farm construction. That money would be on top of $12 million of additional ratepayer funds allocated for the MassCEC in the climate bill. (Most of the agency’s $27 million in revenue this fiscal year is coming from an electric ratepayer surcharge.)

Mariano has asked Representative Jeff Roy, the House chair of the energy committee, to focus on improving the state’s wind-energy workforce.

Mariano also said he plans to authorize a large-scale bonding effort to establish the South Coast as a regional hub for the wind-energy industry. This effort would build on the offshore wind terminal that the MassCEC constructed with state funds in New Bedford. It could also address concerns raised by South Coast leaders that the state’s bidding approach isn’t doing enough to encourage economic development in the region, especially when compared to criteria used in other states when evaluating offshore wind bids.

The House speaker said offshore wind is just one of many industries that could be held back by a mismatch of skills in the workforce. Toward that end, Mariano said he will work to establish a formal skills-credentialing system, possibly with the help of federal stimulus funds, to launch careers for people who choose not to pursue traditional college degrees and to spur educated professionals to refine their skills. He didn’t provide any details about the next steps he would like the Legislature to take toward this goal.