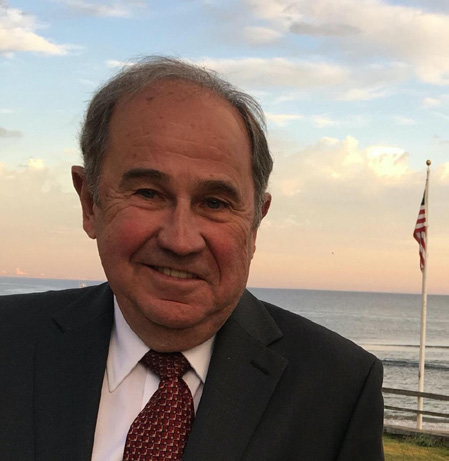 The Environmental Business Council of New England is proud to announce Paul Fennelly, member of the EBC Strategic Planning Committee, has been awarded the EBJ Lifetime Achievement Award.

The EBJ Lifetime Achievement Awards is an annual event that celebrates individuals for their decades of service to the environmental industry.

In the following interview conducted by EBJ, he will be telling us about his careers, his challenges, and triumphs, and how he got where he is today. His examples serve as an inspiration and as a reminder of what our industry is striving to accomplish, and why it matters.

Before retiring in 2015, Paul Fennelly, Ph.D., was Senior Vice President, Global Director of Sales and Marketing, for AECOM’s Global Environment Business Line, a business unit with over $1 billion in revenue. With AECOM, and one of its legacy companies, ENSR Corporation for 25 years, he previously served as President, International Environmental Division, leading corporate expansion into 16 countries.

Prior to AECOM, Paul worked for 10 years at GCA Technology Division doing leading edge work helping the U.S. EPA establish the first stage New Source Performance Standards for controlling air pollution, and doing pioneering work on new pollution control technologies for advanced coal-based combustion techniques. He also served as General Manager, Air Quality Science & Engineering. He is the author of 50 scientific articles and presentations, and holds a PhD in Physical Chemistry from Brandeis University and a BS in Chemistry from Villanova University.

PF: In 1970, I was a third year graduate student pursuing a PhD in Chemistry at Brandeis University in greater Boston. I was fascinated and energized by the world of scientific research and loved the university environment and graduate student lifestyle. I was age 25, newly married, and making good progress on my Ph.D. thesis and beginning to think of life after graduate school.

EBJ: What inspired you to enter the environmental industry, and who were your influential mentors and colleagues?

PF: It was a beautiful spring day in 1970, when I decided to take an afternoon off from my university research project and head down to the banks of the Charles River in Boston to check out an event called Earth Day. It was the first Earth Day, and it was creating a bit of a buzz in greater Boston, particularly on many college campuses. When I arrived, I was swept up – the exhibits, the speeches, the energy, and the enhanced realization that our Environment was in trouble, and people were mobilizing to start turning things around.

I had this vision that politics and government and economics and science were all converging to take on this challenge to clean up and protect the Environment. I wanted to be part of that! It seemed possible that my knowledge and credentials in chemistry could be an asset in the environment movement. However, my Ph.D. research was somewhat esoteric, and not at all directly linked to the pressing environmental issues of the day.

The question for me then became, how can I create a pathway to move from my academic science research into this new and emerging science of environmental protection? With the help of my PH.D. advisor at Brandeis, Prof. Michael Henchman, I landed a post-doctoral fellowship at the Center for Experimental Space Science (CRESS) with Prof. Harold Shiff in Toronto. Prof. Shiff was doing research on chemical reactions that occur in the ionosphere.

I thought I could start up there and work my way down to ground level. And, that’s the way it happened. We worked on ionospheric chemistry and then, eventually, stratospheric chemistry, courtesy of a controversy associated with a proposed fleet of supersonic commercial aircraft that would fly in the stratosphere – and potentially deplete the protective ozone with their emissions. Partly because of our research, the U.S. and several other key nations cancelled plans for a supersonic fleet. (This was before the fluorocarbon threat to the ozone layer, which was recognized 10 -15 years later.)

From the stratosphere, I did get to ground level and moved from academic life to Industry, working on newly invented instrumentation to measure continuously, and in real time, nitric oxide, ozone, and sulfur dioxide using chemical and photometric techniques. Early mentors in Industry included: Len Seale and Art Engelman at GCA Technology and Paul Sher and Bruce Egan at ERT.

Influential and helpful colleagues are far too many to mention, but during my early years, the pioneer years, were Norm Surprenant, Bob Bradway, Gary Hunt (GCA) and Bruce Henschel, Jon Milliken, Ron Venezia, Tim Oppelt (US EPA). My years on the international scene starting up international offices were an extra special experience. Of special help were Claudio Viola, Michael Chan and Eduardo Lopes.

EBJ: What are some of your favorite projects or favorite memories from the 1970s?

PF: My first job in the environmental industry was at AeroChem in Princeton, N.J, where we were developing portable instrumentation for measuring air pollutants such as nitric oxide, ozone and sulfur dioxide. This was a big breakthrough because the current practice was not continuous and required taking collected samples back to a chemistry laboratory for analyses that could take many hours, occasionally days. The new real time continuous measurements changed the way air pollution could be tracked, recorded and mitigated.