Founding Board Member and longtime President and Executive Director of the Environmental Business Council of New England, Inc.

The EBC Lifetime Achievement Award is awarded to Daniel K. Moon in recognition of his notable leadership in the environmental and energy industries. Dan is the force behind the Environmental Business Council of New England (EBC), the first organization in the United States established to support and foster the development of the environmental industry. Over his 31 year tenure with the EBC, Dan grew the organization from less than 50 member companies to over 200 and grew the programming from one or two meetings a month to over 100 per year. Combining drive, ambition, and the ability to bring together all parties, Dan has had an immense influence on the growth of the environmental and energy industries in New England.

As a young student, Dan enjoyed chemistry class and took that love of science to Northeastern University where he majored in chemical engineering. He moved to San Francisco to pursue an MBA and heard a local radio show discussion of the newly formed U.S. Environmental Protection Agency. Immediately energized by the discussion, Dan began work as a summer intern with EPA Region 9 in 1972. Upon graduation, Dan applied for and was hired by EPA Region 1 in Boston to develop a regional hazardous waste management program. Following his service with EPA, Dan worked for private industry on RCRA compliance and hazardous waste remediation programs.

In 1989, Massachusetts Governor Michael Dukakis called a meeting of company leaders involved in the business of environmental management. It was during this meeting, in a private discussion with attorney Don Connors and Governor Dukakis, that the idea of a Council was suggested. Just one year later in 1990 the Environmental Business Council was founded. Dan took on the role of Executive Director in 1997 and focused EBC’s operations on three key drivers: programming, access to decision-makers, and networking. Through Dan’s leadership, the organization formed positive working relationships with New England State agencies, Federal agencies, and regulatory leaders.

Dan’s commitment to forming relationships across the industry led to the ever-increasing number of member companies and the success of EBC’s largest networking events. Because of his endless curiosity and energy, EBC is always able to stay on top of current developments and tackle emerging issues.

The EBC is proud to present this Lifetime Achievement Award to Daniel K. Moon in honor of his dedication to the environmental industry over the past 40 years. 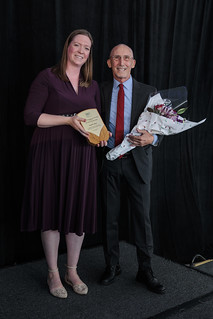 Former longtime President, Chief Executive Officer, and Chair of the Board of Directors of Normandeau Associates, Inc.

Back to EBEE Awards

Leadership by a Non-Profit

Service to the Environmental Industry