Congratulations to the recipients of the 2021 EBC James D.P. Farrell Award for Brownfields-Remediation Project of the Year 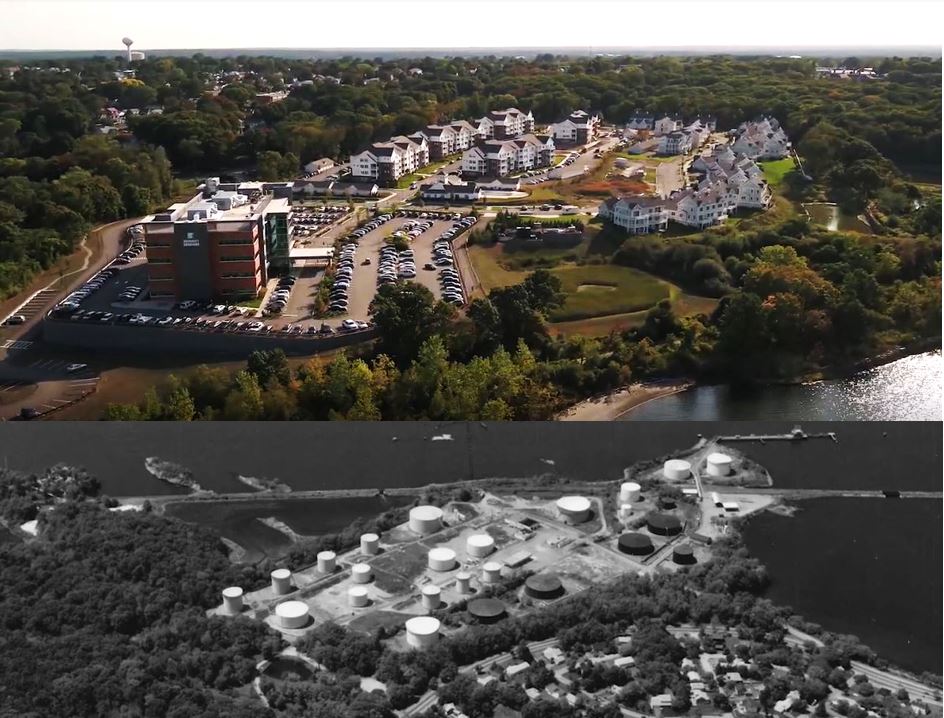 The EBC James D.P. Farrell Award for Brownfields-Remediation Project of the Year is awarded to the Kettle Point development in recognition of the successful redevelopment of a former bulk petroleum storage and distribution terminal along the shores of East Providence, Rhode Island into a mixed-use commercial and residential complex. A mix of remedial strategies including on-site treatment and stabilization of impacted soils, re-use of the treated material, and petroleum recovery technologies allowed for the development of a 90,000 square foot surgical rehabilitation facility and 290-unit residential complex. In addition, a first-of-its-kind hybrid Settlement Agreement allowed portions of the property to be sold and redeveloped independent of the parent property thus enabling financing and phasing of the project.

The award will be presented to the project team by:

The History of the EBC James D.P. Farrell Award for Brownfields-Remediation Project of the Year

This award, established by resolution of the Board of Directors on March 4, 2002, is awarded to a Brownfields, Remediation, or Superfund project in which an EBC member organization has had significant involvement and that serves as an example of excellence notwithstanding the social, economic, technical and institutional challenges imposed.

James D.P. Farrell (1958-2004) actively participated in the EBC Brownfields Committee and Brownfields programs while at the Massachusetts AG’s office where he was chief of the brownfields unit. He was instrumental in making the brownfields redevelopment process work in Massachusetts and was often involved in delicate negotiations among developers, municipalities and former owners of contaminated sites. Jim was admired for his work on complex Superfund negotiations – including negotiations in New England. As a DOJ attorney on the General Electric Pittsfield case, Jim’s ideas during negotiations helped parties reach an unprecedented settlement. Jim’s work for the AG’s office strengthened the partnership between EPA New England and the state. He was a valued member of the South Weymouth Naval Base case team, where he helped bring together representatives of the business, environmental and military communities for site cleanup and redevelopment.

Prior to 1999, he worked in the environmental enforcement division at the U.S. Department of Justice and as an aide to U.S. Senator Warren Rudman of New Hampshire.

Congratulations to the recipients of the 2020 James D. P. Farrell Award for Brownfields-Remediation Project of the Year

The EBC James D.P. Farrell Award for Brownfields-Remediation Project of the Year is awarded to Encore Boston Harbor in recognition of the remarkable redevelopment of the former Monsanto Chemical Company site on the Mystic River in Everett, Massachusetts. The $2.6B project, the largest private development in the history of Massachusetts, removed 890,000 tons of contaminated soil from the site and included the construction of a living shoreline, a 1MW solar array, 3 MW cogeneration plant, 4MW battery energy storage system, and a rainwater irrigation system. The site is now host to a 27-story hotel tower, convention area, and gaming, retail, and dining venues. The project has revitalized a formerly industrial area of Everett and now hosts a public harborwalk and ferry transportation to and from downtown Boston.

The award will be presented to the project team by Lauren A. Liss,
President and CEO, MassDevelopment.