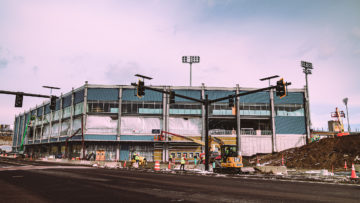 Please join the Environmental Business Council for an afternoon of collaborative discussion, as the team behind the 2022 EBC Nicholas Humber Environmental-Energy Award for Outstanding Collaboration joins us to discuss their award winning project, Polar Park.

The award-winning team members will present a project overview and focus on the art of team building and maintaining a strong professional network, adapting to project challenges, and the importance of communication when working with a diverse group of collaborators and stakeholders.

A robust moderated discussion with the award team will conclude the program. This webinar is hosted by the EBC Ascending Professionals Committee.

Additional information can be found within the tabs above.

The EBC Nicholas Humber Award for Outstanding Collaboration was awarded to the Polar Park project, a challenging urban renewal project that has revitalized over 18 acres of brownfields that sat vacant for decades in the heart of Worcester, Massachusetts. As an urban renewal project, Polar Park was led by the Worcester Redevelopment Authority (WRA) in partnership with the City of Worcester and the Worcester Red Sox, Triple-A Affiliate to the Boston Red Sox, who have relocated from Pawtucket, Rhode Island. The brownfields redevelopment effort involved coordination and compliance among seven Release Tracking Numbers (RTN) on record with MassDEP. Over 150,000 tons of soil had to be excavated, managed, and transported. The cost of the brownfields assessment and remediation was supported in part by an Assessment Grant from the U.S Environmental Protection Agency, and Cleanup Grant from MassDevelopment’s Brownfields Redevelopment Fund. The Ballpark will serve as a hub for community activity in the City, hosting 70 Minor League Baseball games per year in addition to numerous other activities such as concerts, high school and college sporting events, fundraisers for local community organizations and non-profits (including the WooSox Foundation), fireworks shows, and high school graduations. Numerous businesses already elected to move or expand to Worcester because of the presence of the Ballpark and the Worcester Red Sox, and more development in the Canal District specifically is expected to follow.

The available PowerPoint presentations from the EBC Lunchtime Webinar: Spotlight on Outstanding Collaboration – Polar Park completed on March 22, 2022, can be viewed below.

The webinar recording is available to EBC Members via the Info Hub. If you are an employee of an EBC Member Company and cannot access the Info Hub, please contact the EBC Office.

Non-Members are welcome to register and pay the Non-Member registration rate to receive access to the webinar recording.