The Environmental Business Council (EBC) and Boston Bar Association (BBA) invite you to meet and hear from the new Regional Administrator of the Environmental Protection Agency (EPA).

Don’t miss this opportunity to hear about policy, programmatic, and enforcement objectives for the region, as well as to mingle with environmental professionals and lawyers from all sectors. 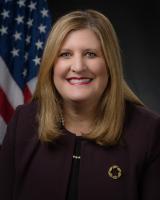 In 2015, Ms. Dunn was elected to the American College of Environmental Lawyers and served in leadership roles through the end of 2017. She also served through the end of 2017 on the executive committee and board of directors of the Environmental Law Institute. She has chaired the American Bar Association’s (ABA) section of Environment, Energy, and Resources, its World Justice Task Force, and served on the ABA Presidential Force on Sustainable Development.

Ms. Dunn received a B.A. in political science from James Madison University followed by a J.D. from the Columbus School of Law, where she was elected editor-in-chief of the law review. She is a member of the bar in D.C., Maryland, and New York, and the U.S. Supreme Court.

Risks and Opportunity Markets: Climate Change and the Housing Crisis